June 19, 2013.  We arrived in Lisbon from Marrakech on Sunday evening.  Checked into Hotel Avenida Palace and went to dinner at Pinoquio’s for fish.  Afterwords, we walked the boulevards and through the parks.  The city is beautiful.  Very old.  Well maintained.  Lot of people on the streets late at night.  Feel comfortable in Lisbon.  It is nice to get back to the familiarity after being in Morocco where everything was so foreign.  On Monday, we walked all day.  Visited the Belem Tower, Castel St. George, Alfama… the city’s old section, and took lots of photos which we will post soon.  On Tuesday, we took a car and driver to Fatima to see Our Lady of Fatima Shrine where Catholic’s believe Mary appeared twice to two young girls in 1917.  The Grotto, old cathedral and new basilica wowed us both.  The new basilica seats 8000 worshipers.  From Fatima, we crossed over the mountains to the Atlantic Coast and visited Nazare, where surfing championships are held.  The waves reach 17 meters we are told.  You can google Nazare big wave on you tube.  Amazing videos.  Our last stop was Obidos, a small mountain top village with narrow streets and many beautiful houses and churches.  Obidos specializes in chocolate cups from which a locally made cherry liquor is drunk.  Today we are going to Sintra, Caicais and Cabo de Rocco to see the furthest point west on the European main continent and some palaces.  Write more later.  Happy Birthday John Barth.  Love and miss you all.  –Norm & Rita.

The road up to the Pena Palace. Very romantic 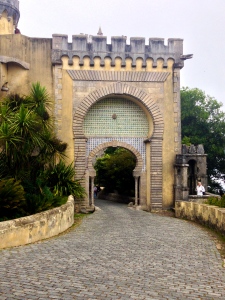 Entrance to the Pena Palace/Castle

Dining table set as it was in the late 1800’s. Look at all the wine glasses. 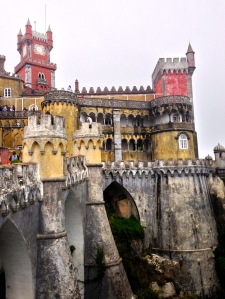 Pena Palace in Sintra. This place was amazing. I could post an album of the pictures here. It had the original furniture in most of the rooms.

Great FADO music here. This place has 9 tables and is run by a couple, she cooks and he serves the food. They seat everyone in 15 minute intervals and once dinner is over, they also play and sing the FADO music. Fantastic!

This is the “LIFT” that we took in Lisbon to get up a couple of streets that has no sidewalk. Pretty cool stuff. See Norm waving “HELLO?!!”

Another beautiful doorway in Obidos, Portugal

The inside of the Sanctuary. on each side of the alter there are tombs for Jacinta and Francisco, cousins of Lucia who saw the “lady of the rosary” on May 13, 1917.

This is to show you how large the parking area is, but people don’t park cars here, they hold the services and this is where the people stand.

Sanctuary of Fatima – This picture cannot do this justice. The alter in front faces the parking lot and the grotto on the left.

This is the NEW Basilica at the opposite end of the parking area and this is so modern, it’s unbelievable!

This s the alter. If you can enlarge this photo, look at the details on the face of the crucifix 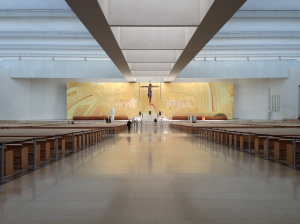 This was taken at the nave area, the people at the alter look like ants.. crazy big. It holds 8000 people.

Cliff of Nazare, look up the U-tube surfer that road the wave that was higher than this cliff!! See the link below: http://media.smh.com.au/sport/sports-hq/is-this-the-biggest-wave-ever-surfed-3991501.html

These are some houses built on top of the cliff of Nazare.