We flew from Udaipur, to Delhi, to Varnasi and to Khajuraho our final destination on Wednesday.  Upon arrival, we drove one lane roads to our Hotel Lalith passing dogs, cows, goats, pigs and water buffalo wandering toward us at times and across our path at other times. Those animals were up and about scarring the tourists on the one lane roads and were either resting nearby the road in the shade or grazing on the garbage heaps strewn around everywhere on the ground.  Other animals wandered into shops to visit with the shopkeepers. For example, I saw a cow stick his head into a stall where food was being prepared and a goat standing on the step to a store which sold lottery tickets and potato chips. Strangely, these scenes have become very common place to Rita and me after only one week in India.  People were doing their morning bathing at the nearest water pump along the road.  Children were riding their bikes to and from school in neatly cleaned and pressed school uniforms.  If the children do not have bikes, the government will provide them so there is no excuse for not attending school. Kharjuraho is a small village of approximately 20,000.  At one time, there were 55 sandstone temples in Kharjuraho, but only a few are remaining today. People come from all over the world to see the elaborately stone carved temples from the 10th, 11th and 12th centuries. The temples were constructed by Hindu Kings, but Hindu Kings who showed a tolerance toward other religions such as Islam and Christianity. It took 20,000 workers to build the temples. 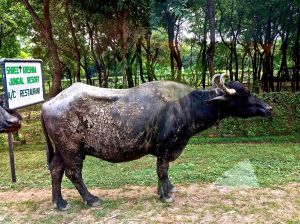 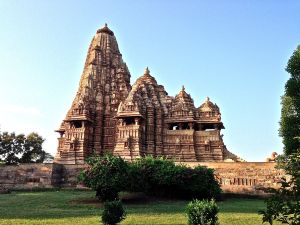 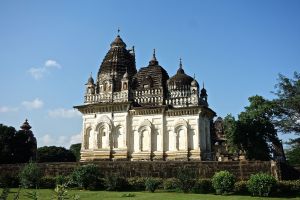 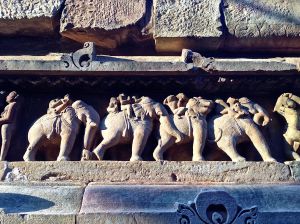 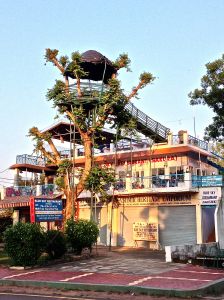