Rita and I left India just in time to miss the killer cyclone Phailin hitting the east coast of India.  We were in route to Bangkok during the storm and had to deviate our flight pattern to avoid Phailin. Even then, we had a pretty bumpy ride for about 4 hours. But, we arrived safely in Bangkok on Friday night.  We are staying in the Chao Phraya a River which is known as the river of kings. It is a very busy working river with lots of barge traffic, water taxis, longboat taxis, and dinner cruise boats. The river is brown, not exceptionally clean, filled with debri, and utterly fascinating to watch.

We took it easy the first couple of days. Rita has an upper respiratory infection, so we are nursing her along and hoping it gets better soon. On Friday, we listened to a great singer and her guitar player in our hotel lounge.  Sang for hours all the great 70s, 80s and 90s hits. Of course, everything was in English.  On Saturday, we went to this Sky Bar for drinks. It is a rooftop bar on the 63rd floor of the Lebua Hotel.  Obviously, it has great views of Bangkok. But, more importantly, it was one of the locations used in Hangover 2.

Today we did our real sightseeing.  We started at 8 in the morning and quit at 1.  It was 95 degrees and humidity was 70%.  Everything including us was dripping!  In any event, we took a water taxi to the Wat Phra Kaew Temple, the most important temple in Thailand.  It contains the Emerald Buddha, which is actually jade. It is only two feet tall, but sits on a tall gold alter.  The Thai people are very spiritual and devote Buddhist. They pray, make offerings and tithe at some 4000 Temples in Bangkok and 44,000 a Temples nationwide. It is a joy to watch them practicing their religion.  The Emerald Temple and the surrounding Temples have the most amazing architecture consisting of colorful tile roofs, gold leaf tiles, mosaic tiles and mirrors, and broken porcelain salvaged from shipments from China.  It even has a complete replica of Angkor Wat, where we are scheduled to go next. It seems that the King if Thailand saw Angkor Wat and had his craftsman create this replica from his drawings since this was before the invention of the camera.  The Emerald Temple is located within the Grand Palace which is the official residence of the King of Thailand.  The Palace is a replica of Buckingham Palace.

From the Wat and Palace, we took a tuk tuk, a three wheeled vehicle, to a longboat taxi which took us through the canals of Bangkok to see how real Bangkok people actually live.  There are mansions interspersed with commercial buildings, shacks, and temples. Bangkok in recent years has been hit pretty hard by flooding and evidence of such flood damage was everywhere along the canals.

The longboat taxi deposited us at the Temple of the Dawn, which is constructed of broken porcelain from China arranged in floral patterns. It is known for its central spire which towers over 200 feet in height.

After the Temple of Dawn, we took a water taxi to the a Temple of the Reclining Buddha.  The Reclining Buddha is 45 feet in height and over 129 feet in length and covered in gold leaf. President Obama and Hillary Clinton visited the site in November 2012.  This is one big Buddha!

Our last stop of the day was to see the Golden Buddha, which has an interesting story associated with it.  The Buddha was covered with concrete and was being moved from one temple to another on 1955 when a workman scratched the concrete by accident and discovered that the concrete was merely a cover for a solid gold Buddha!  It is the largest solid gold statue in the world.  It is 9.8 feet tall and weighs 5.5 tons.  It is estimated that the worth is over $250 million Dollars.  The origin of the statue remains unclear even today!!

After 5 hours of sightseeing in the heat and humidity, we were Buddha’d out!  We returned to the hotel for a couple of hours of swimming and a two-hour Thai massage. Tomorrow is a free day so we can catch up blogging and photos.  We leave for Siem Reap, Angkor Wat, Cambodia on Monday as we wind our way home via our circuitous route.

We’ll post Bangkok pictures as soon as we can.  Gotta catch and early flight in the morning so need to get to bed.

This is the GOLDEN BUDDHA. It is worth over 250 Million dollars. 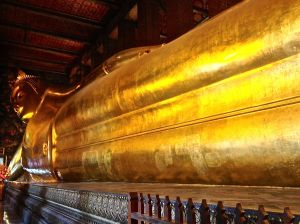 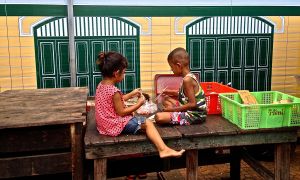 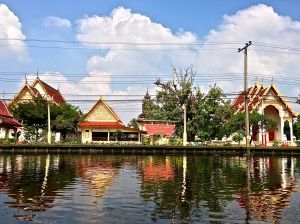 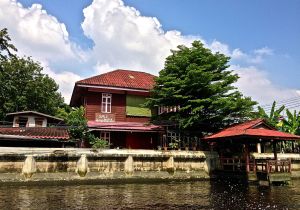 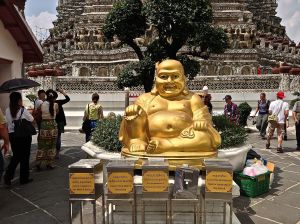 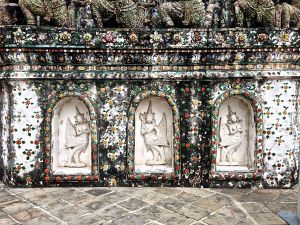 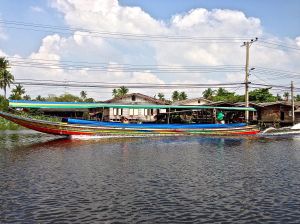 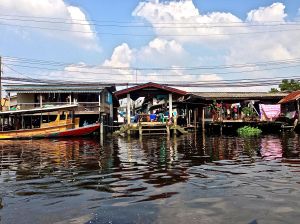 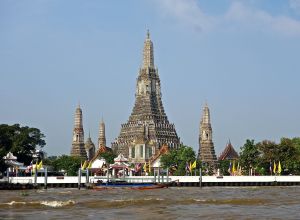 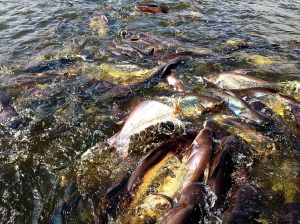 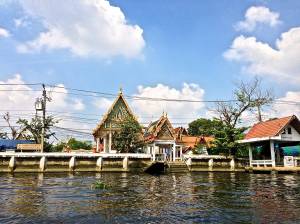 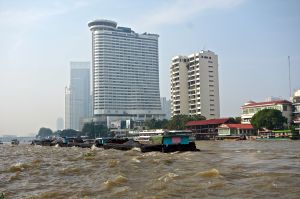 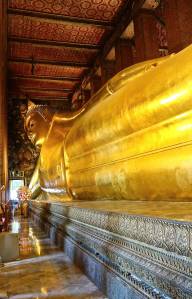 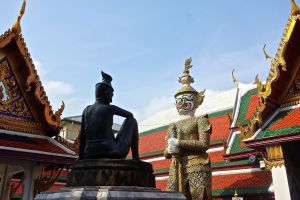 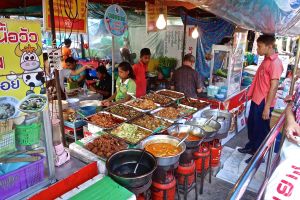 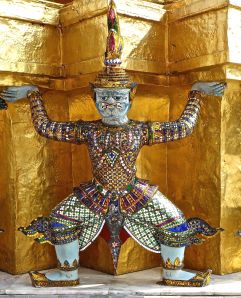 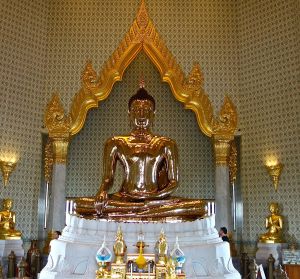