June 13, 2013 – Let us explain what has been the “highlight” of our Fes adventure.  Remember, we wanted to take a backpacking trip around the world ?  Well we almost did.  When we got to Heathrow to fly to Fes, The gate attendant MADE US CHECK OUR TOTALLY LEGAL SIZED BAGS, and instructed us to pick them up at the carousel in Fes.  So guess what… upon arrival at the Fes Airport, our bags were not on the carousel, nor were they in Fes.  So… we began our trip in Fes with the clothes on our backs.  That is why most of the pictures you see, we have the same thing on every day.  So, we filed a claim, called three airlines, three airports, tried to speak in French, Spanish and English( with heavy accents), filed a travel insurance claim and had the help of those people, but to no avail.  Tuesday  evening, after numerous phone calls and emails, (mind you we have no phone or email service in Morocco, except if the WiFi connects),  we only received one fact… our luggage did get on the plane in London.  So it must be stuck in Barcelona.  After all that work, we decided to go backpacking.  Went out to explore the town some more and went to a great French / Moroccan restaurant that was called MB Maison Blanc and had a wonderful dinner in a fancy place in our dirty clothes of three days.  When we got back to the hotel, the concierge came up to us and said he received a phone call from the airport and our bags would be there tomorrow on the 11:30 flight.  So we took a driver, went to the airport, an YEAH…. our bags were there ….. MARKED RUSH…. TO FES!! HILARIOUS NOW, but now so funny the past four days.

After we picked up our luggage, we took a 7 hour train ride to Marrakech and the scenery was superb.  We saw large farms bigger than anything we’ve ever seen in Kansas or Nebraska.  There were many farms with cattle, sheep, donkeys, camels and the most interesting thing was that you always saw a “shepard” with the livestock but if you looked around you couldn’t see a home or even a building close at all.  We arrived in Marrakech at 10:15 PM and the hotel (Les Jardins de la Koutoubia) is beautiful.  Three pools, one in the courtyard, one on the roof that is heated and one in the lower lever spa area with jets around the entire pool.  Pretty cool.  Tonight we are going to the square to see the snake charmers and african musicians. 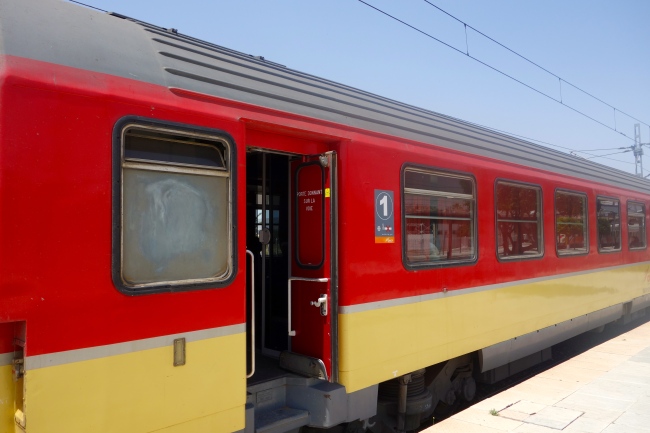 Don’t you know we’re riding on the Marrakech express!!! Crosby Stills Nash & Young, for all you youngin’s that don’t recognize this!! 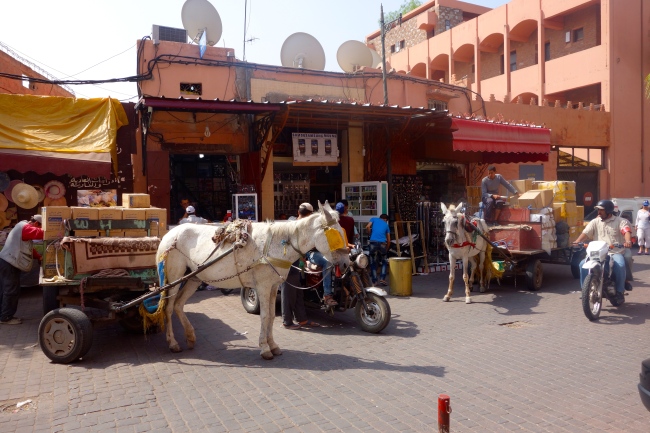 Walk out our front door from the hotel to this. Pretty cool….. and we have WiFi!!! Crazy!