Have you noticed that we start each blog with the day or the date?  That is for OUR benefit!  We have trouble remembering the day or date unless we write it down. I guess that is one of the advantages, or disadvantages, of not being on a schedule. But, then again, it might just be a sign of bad memory or old age!!!

Today is our 85th day on the road. All of our hotels have had television. Not all of our hotels have had channels in English. When we are lucky, we get CNN, BBC, and CNBC.  But, the stations do not have enough programming for 24/7 broadcasting so they repeat the same story over, and over and over.  We have become experts on news, weather, sports and finance.  Trivial pursuit anyone?  When we are unlucky, we get re-runs of Andy Griffith or Matlock.  It is truly amazing to see Andy, Aunt Bea and Barney speaking fluent German, French, Italian, Dutch, etc.  But, “golly” is still “golly” in any language.  If you are too young to remember this show, just ignore and read on!

So, far we have used different currency in 6 countries.  We are carrying US Dollars, Euros, Danish Krone, Norwegian Krone, Swedish Krona and Russian Rubles. Keeping track of the currency is done by my finance department — you guessed it — Rita!  Sometimes it is a shock when we buy diesel for the car, and the pump says 861.00 krona, or Rita buys a coke and the cost is 330.20 rubles, or we have a dinner and the bill is 6975.00 rubles, until we convert the pump price, cost or bill to our US Dollars!

After a long, hard, tiring, hot day of sightseeing, Rita and I have been having a cocktail hour whenever we can fit it into our busy schedule.  Normally, beer and wine have been much cheaper than mixed drinks. A beer is a few dollars, depending on what you order and on whether the mug is so large it takes one or two hands to lift it.  Wine is a few dollars more depending on whether you drink the local stuff or whether you go for the “BIG Carl”.  Mixed drinks are usually $15 USD so we don’t get many of those!  But, yesterday we arrived in St. Petersburg, Russia where vodka is finally cheaper than wine.  That is the good news.  The bad news is that our hotel bar is opened 24/7!!!

St. Petersburg is 391 kilometers from Helsinki and we took the high-speed train called “Allegro”.

For my brother- in- law Sib, a retired railroader, Allegro has a top speed of 220 kph or 136.7 mph.  The ride was smooth, took 3 hours and they served a meal. We may never fly again as it was so easy, quick and convenient.  The train only had 8 cars, plus a dining car.

St. Petersburg is known as the Venice of the North because it has so many canals.  Yesterday, we saw the St. Isaac’s Cathedral, which allegedly will seat 14,000 (think basketball arena), the Church of the Spilled Blood, which was built on the site where Tsar Alexander II was killed, and the Hermitage Museum and Winter Palace.  The Winter Palace was the official residence of the Russian monarchy from 1732 to 1917. It is opulent beyond words and is on a scale that defies explanation. For example, it is 750 feet long and 100 feet high.  It has 1786 doors, 1945 windows, 1500 rooms and 117 staircases!  We have never seen anything that compares to the Winter Palace.

The Winter Palace also houses the Hermitage Museum, which contains the art collection of the Russian State. We saw room, after room, after room, of paintings by Picasso, Matisse, Cezanne, Gauguin, Monet, Manet, Van Gogh and Pissarro.  In one room we counted 14 Van Gogh paintings, and there were several rooms of just Van Gogh. We saw a sculpture by Michelangelo.  We saw two paintings by Da Vinci.  Apparently, there are only 14 known Da Vinci paintings.  Needless to say, the Hermitage was a WOW moment, actually 3 hours of WOW!!! for both of us.  While the Louvre may be larger, we were more impressed with the Hermitage Collection.

Today, we will wrap up our sight seeing in St. Petersburg.  Tomorrow, we take a high-speed train to Moscow.

This Saturday evening, August 24th, Rita’s daughter Stephanie, will perform with her aunt Linda, (Steph’s inspiration for becoming a Colt’s Cheerleader) and other alumni cheerleaders at the Colts pre-season game with the Browns.  It’s kind of a reunion!  She was a cheerleader a few years ago for the Colts. Rita’s daughter Melissa will be at the game cheering on her sister, hanging out for the weekend in Indy, and one of Rita’s  friends, Lynn is going to fill in as MOM for the day, since Rita can’t be there, and also Rita’s other friend, Cindy is going to video tape it for her.  Thank you all for all of your help, since she can’t be there!!!  If you see Stephanie…. say “Hi” to her for us!!

Best wishes to all and GO COLTS!

Love and miss you all. Norm & Rita

One of the many canal bridges

St. Isaac’s Church – There have been at least a dozen “brides” taking pictures in front of this church just today! 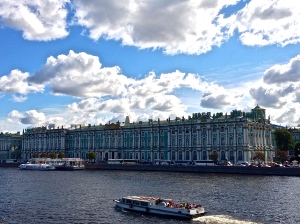 View of the Winter Palace through the garden

One of Gardens at the Winter Palace

Norm eating “Borscht” soup! He HATES beets and this is made out of beetroots!! But you have to eat the local food. It’s a rule, kinda like the “carry-on” luggage only. LOL!

Church of the Spilled Blood 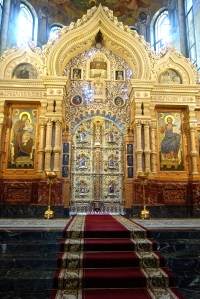 Interior of the Church of the Spilled Blood

The walls and ceiling were lined with mosaics.

This is a decorated car that the brides drive around in and take pictures in front of the churches. This one isn’t decorated as much as some of the others we saw. 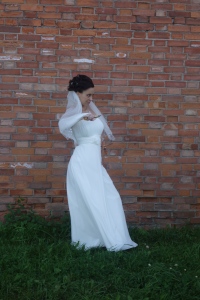 One of the 20 or so brides we saw today taking pictures. Not sure the significance of the knife in her hand!

Really??? She took about 10 different poses with this knife!

Peter and Paul Cathedral at the Fortress

One thought on “St. Petersburg, Russia – The Venice of the North”